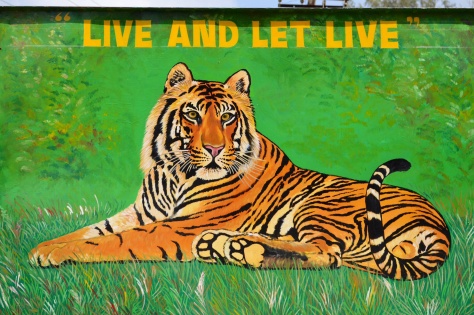 On my way to the sixth meeting of the Green Climate Fund Board (GCFB) this month, I grabbed the opportunity for an unplanned visit to Nagarahole National Park in Karnataka, south India. The significance of this journey struck me only as I entered the park, when I remembered the last time I was there. A little over fifteen years ago, I visited Nagarahole to review a project funded by the Global Environment Facility (GEF) for the State of India’s Environment Report, published by the Centre for Science and Environment (CSE) in New Delhi.The story I wrote then has important lessons for the design of the GCF, so I think it will be worth recounting here.

Setting aside large tracts of land as “protected areas‟ or national parks for biodiversity conservation has always been a controversial concept in India. For instance, purely conservationist efforts to protect the tiger in the 1970s and 1980s alienated communities living in and around these protected areas, as they felt tiger conservation was being prioritised over their own basic needs. Communities living in and around tiger habitats were often evicted without viable alternative livelihoods. Tiger numbers declined rather than increased as local populations turned a blind eye to, or even actively supported, tiger poaching.

Against this politically charged background, the GEF approved a US$67 million “Ecodevelopment project” in seven National Parks across India in 1994. The project was to be funded by the GEF (US$20 million), the World Bank (US$28 million), the Indian government and “village beneficiaries‟. The World Bank was the Implementing Agency. The term “ecodevelopment‟ was meant to reflect the lessons learnt from previous conservation efforts in India and other developing countries – mainly, that conservation efforts cannot be successful without taking local community needs into account. Planning documents appeared to reflect this lesson, and were liberally sprinkled with words such as participatory processes, micro-plans and consultations.

As the project evolved, however, it soon became clear that the only participatory element in the project’s ecodevelopment approach was the terminology. In almost all the seven project areas, local communities protested against their lack of involvement in planning – including plans for the so-called “voluntary relocation‟ of communities living inside the forest areas.

Despite protests from local communities and support from local and national-level NGOs, none of the three partners in the ecodevelopment project (the government of India, GEF and the World Bank) showed signs of relenting. The GEF lacked a complaints procedure for project-affected communities (a Conflict Resolution Commissioner has been appointed since, but this is one individual who reports to the GEF CEO, and cannot therefore be considered independent). CSE, the GEF NGO focal point for the South Asia, made several attempts to get the concerns of the communities heard in New Delhi and also in Washington, through interventions made in the GEF Council meetings and during the GEF Assembly in New Delhi in 1998 (where affected communities were present to make their case – see this documentary for more information).

Frustrated by the lack of response, local NGOs and communities in Nagarahole National Park in south India sent a letter to the World Bank Inspection Panel in 1998. The Panel is considered an important precedent in international law, as it provides an opportunity for local citizens to challenge the activities of an international institution. It was created in an attempt to increase the accountability of the World Bank and to improve compliance with its social and environmental policies. The letter from the local communities of Nagarahole claimed serious violations of the World Bank’s own stated Operational Directives, including one that called for the informed participation of the potential affected peoples themselves, and another on Disclosure of Information.

The Report of the Inspection Panel, placed before the Executive Directors of the Bank in October 1998, agreed that the concerns raised by the communities were valid. They confirmed serious flaws in the design and basic premises of the project: The Panel finds that certain key premises underlying the design of the project at the Nagarahole site are flawed, as a result of which there is a significant potential for serious harm. It therefore recommends that the Executive Directors authorise an investigation into the case.

Instead of authorising such an investigation, however, the Bank directors ruled that a full investigation was not warranted and merely called for these flaws to be rectified during the course of implementing the Project. The project continued into a second and third phase, although Nagarahole was excluded in Phase III. Bank documents record the Project as completed satisfactorily – including an unbelievable satisfactory rating for social and community benefits.

This experience highlights just how difficult it can be for local communities to have their concerns reflected in project design, and to seek redress when their basic rights are flouted. It points to the clear need for the GCF to not only seek “no objection” from potentially affected communities, but also to create effective redress mechanisms that are easily accessible by local communities. The first stop for redress should ideally be at the national and sub-national levels, so that they can be accessed, and the first line of responsibility should lie squarely with national governments.

Issues that cannot be resolved at the national level will need a global-level GCF redress mechanism. The Governing Instrument of the GCF includes a provision for this, calling on the Board to establish an independent redress mechanism that will report to the Board. The mechanism will receive complaints relating to the operation of the Fund and will evaluate and make recommendations. The design of this redress mechanism is one of the elements the GCFB is addressing at its sixth meeting in Bali.

The experience with the World Bank’s Inspection Panel, formed in 1993, provides lessons for setting up credible and independent national and global redress mechanisms for the GCF. In particular, the mechanisms should be independent, accountable and have the power to enforce their decisions.

To ensure the independence of the mechanism, members should be chosen from outside the GCF structure, and the budget should be independent and adequate. The Bank’s Inspection Panel was criticised because panel members were nominated by the Bank President and approved by the Executive Directors; panel members were subject to the requirements of the Bank’s Articles of Agreement that demand exclusive loyalty to the Bank; and the President decided the salaries for the members.

To be effective, the mechanism must have the authority to ensure that their recommendations are acted upon. The power of the World Bank’s Inspection Panel is limited – nothing in the resolution through which the Panel was formed commits the Bank to rectifying problems uncovered by panel investigations. The Bank President is only required to respond to panel findings by informing the Executive Directors of actions that she or he intends to take, if any. The Executive Directors resolve any conflicts between panel findings and staff responses.

Poor and vulnerable communities will have more than their share to deal with as climate impacts get worse. Under no circumstances should they have to deal with adverse impacts from the activities of a Fund created to help them. The GCFB will therefore do well to keep their interests uppermost in mind while designing a robust and usable redress mechanism, in addition to building in sufficient safeguards to ensure that the consent of communities is sought before projects and activities are initiated.

PS: Since the ecodevelopment debacle in India, policy changes have taken place to guard against blatant disregard for community rights. In 2006, a Tribal Rights Act was passed which, among other things, laid out a procedure by which people can be resettled from areas if it is found to be necessary for wildlife conservation – including irrefutable proof that relocation is scientifically necessary and that no other alternative is available; a process of public consultation; and consent from the local community. The resettlement must provide not only compensation but also a secure livelihood. In 2007, a National Resettlement and Rehabilitation policy was also agreed.

1 Response to The Green Climate Fund’s redress mechanism: A cautionary tale from Nagarahole