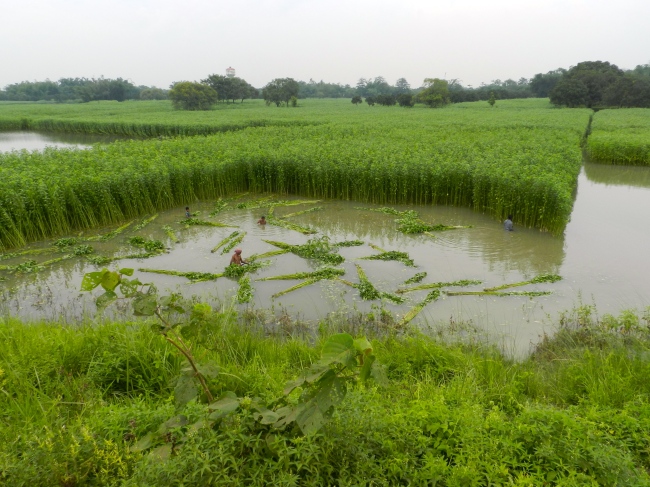 I travelled from one Indian state run by a woman Chief Minister to another. In Tamil Nadu, Chief Minister Jayalalithaa is Amma (mother) to her electorate. In West Bengal, Mamata Banerjee is Didi (sister).

West Bengal is preparing for panchayat (local government) elections, which have already been postponed once because the State Election Commission thought security arrangements were insufficient. When we get to the railway station in Maldha, a city north of Kolkata, a well-armed Reserve Police Force is gathering in preparation.

Maldha, also known as English Bazaar, is known for a special mango variety, jute and silk. I’m told local farmers were forced to cultivate indigo during colonial times, but it is considered a weed and no longer grown. Thirty or more years of communist rule, followed by Didi’s Trinamool (grassroots) Congress, appear to have done it little good. The city is run down and looks more like a provincial town.

We head for Manikchak, one of the villages the Kolkata-based Development Research Communication and Services Centre (DRCSC) is implementing another GIZ climate change adaptation project. The village is on the banks of the Ganga, and has been displaced a few times by the changing course of the river.

The village fields are on its fertile banks, and hence flood-prone. Matters are made considerably worse by a bund built by the government to keep the Ganga waters out. The bund has ended up trapping water on the other side as well, hence waterlogging the fields. Villagers have been campaigning for several years for a canal to drain the water out. When eventually they got the attention of the local official, he chose to ignore the request for a canal, and instead took the advice of his engineer to build a sluice gate to drain out the water into the Ganga. This has simply compounded the problem – the river water obviously has more force, and pushes more water into the fields. To me, this gives meaning to the word ‘maladaptation’. 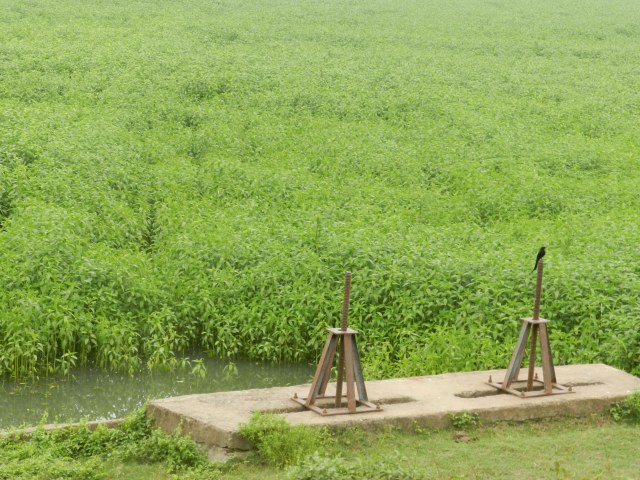 Unfortunately, we are in time to see exactly what the villagers mean. There was heavy rainfall over a two-day period in the previous week, and the results are disastrous. Acres of jute and paddy have been flooded. Farmers are waist-deep in water to harvest the immature jute, and salvage what they can.

There is an air of resignation among the farmers when we talk to them about their loss. No, they received no warning of the rainfall, they get no weather warning or crop advice. No, they will not receive compensation, insurance payouts or low-interest loans to tide over the loss. Their options? Migrate elsewhere for labour (the area has one of the highest rates of migration in the country) or take high-interest loans from local moneylenders.

Why don’t they go to their panchayat to demand help, we ask? The villagers are not forthcoming on this subject, merely saying they are unlikely to get help. It is only later I learn that the deeply divided politics that runs through every level of the state has extreme and ugly consequences for those who question the status quo. A “political murder” took place in the village only a week ago.

This year, DRCSC’s intervention could make a difference. They have been promoting Sesbania Grandiflora as an option for jute among the farmers, along with a flood-resistant variety of paddy. Sesbania is flood and drought resistant. It is used for fuel and fodder, and because of the low inputs it needs, could provide higher net profits than jute. We can clearly see that it has survived the flooding better than the jute. Already, the previous year’s success has meant that more farmers have planted it this year. 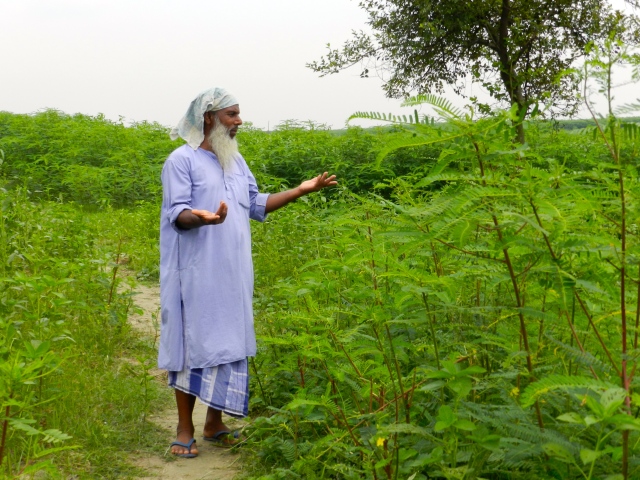 Saifuddin shows us his sesbania field

The cycle of floods and loss has taken its toll on Manikchand, deepening its poverty. It is a conservative village, and initially the men did not look favourably on DRCSC’s efforts to engage the women. It took the organisation a year to initiate a women’s self-help group. The women were convinced after a field trip to another village, where they saw the benefits of such a group.

Since then, DRCSC has promoted “nutrition gardens”, where women plant vegetables in every available space around their huts to address the nutritional needs of their families. They have also teamed up with the West Bengal Renewable Energy Development Agency to install biogas plants in households that have cattle, and hence the fuel to run the units. Even the families that have cattle, though, only have enough to produce enough fuel to cook one meal. For the other meals, they continue to depend on chullahs and crop waste. 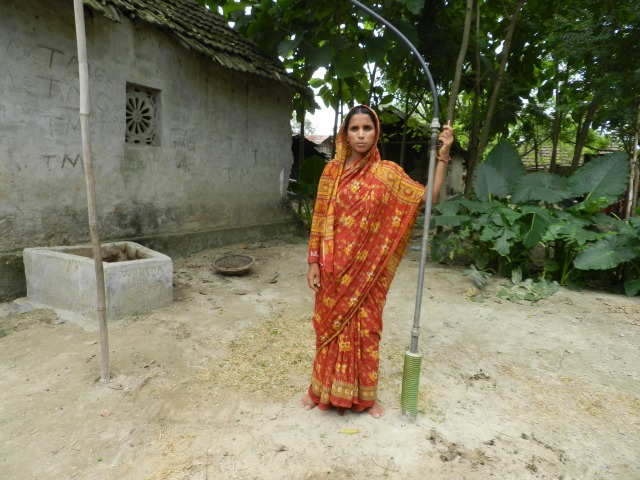 Ruksanna with her biogas installation works. “The best thing about having biogas is that I can cook something for my children whenever they want, without having to light a chullah,” she says.

While the women are well aware of the havoc that the changing and increasingly unpredictable climate is playing with their families’ livelihoods, that is certainly not uppermost on their minds. They have more basic needs. When asked about the self-help group’s priorities, sanitation facilities top the list.

This entry was posted in Uncategorized and tagged adaptation, climate change, maladaptation. Bookmark the permalink.

1 Response to Maladaptation in Maldha