Vulnerable India 4: Modi must deal with the ecological vulnerability of India’s poor

India has a new government. Narendra Modi, leader of the centre-right National Democratic Alliance (NDA), took oath as Prime Minster this week following a landslide election victory for the Bharatiya Janata Party (BJP). What will this mean for India’s poor, and their vulnerability to climate change? To answer this question, we must first delve once again into the causes of poverty and vulnerability in India.

India is home to 33 per cent of the world’s poor. Poverty levels in the country have not reduced at the same pace as overall economic growth witnessed in recent years, with 41.6 per cent of India’s population of 1.2 billion people still living on less than US$ 1.25 a day, according to the International Fund for Agricultural Development (IFAD).

Of the total number of poor in India, 73 per cent live in rural areas and are concentrated in nine central and northeastern states: Uttar Pradesh, Uttarakhand, Bihar, Jharkhand, Madhya Pradesh, Chhattisgarh, West Bengal, Maharashtra, and Orissa (Map 1). The concentration of poverty in these states has gone up rather than down – from 62 per cent in 1973-74, to 76 per cent in 2004-05 – as the rural poor here have not benefited from India’s economic growth in recent years. These states are also among the most vulnerable to climate change (Map 2). Paradoxically, these states are also among the richest in natural resources.

This nexus between poverty, climate vulnerability and natural resources is an important one to understand. The poor are more vulnerable to climate change because they have a low “adaptive capacity” and a high “development deficit”, to use climate-speak. That much is widely acknowledged and accepted, and I have explored this link in my previous blog on the politics of vulnerability. What about the link with natural resources?

GDP of the poor

Poverty reduction strategies, however, tend to focus mainly on welfare measures and cash incomes that are generally prescribed by economists to deal with economic poverty. The contribution made to the household incomes of the rural poor by activities such as harvesting food, fuel wood, fodder, medicinal plants, and timber are typically not included in national statistics, even though these activities generate a high proportion of the total income of poor families, particularly during periods of both predictable and unpredictable short-falls in other livelihood sources.

For instance, the contribution of forests towards livelihoods is not accounted for in calculations of the Gross Domestic Product (GDP). The Ministry of Environment and Forests estimates that forests contribute 1.7 – 2.7 per cent of the nation’s GDP. According to the Green Indian States Trust, when forest services such as fresh water, soil nutrients and non-timber forest products are given value, forests contribute around 7 per cent of national GDP. However, they contribute 57 per cent of the income of India‘s rural poor (see Figure). 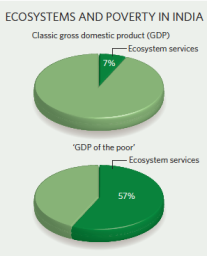 Alternatively, the loss of capital assets due to resource depletion or the natural resource degradation is also not taken into account. As the 2005 Millennium Ecosystem Assessment notes, a country could cut its forests and deplete its fisheries, and this would show only as a positive gain to GDP despite the loss of a capital asset.

What the UPA did

The outgoing government under the United Progressive Alliance (UPA) did set out to establish at least a legislative framework in this context, by establishing several basic rights since it came into power in 2004, including a right to employment through the National Rural Employment Guarantee Act (NREGA) 2005; a Right to Information Act, 2006; a Forest Rights Act 2006; a Right to Education Act, 2009; a Right to Fair Compensation and Transparency in Land Acquisition, Rehabilitation and Resettlement Act, 2012; a Lokpal Act, 2013; and a Food Security Act 2013. Critics accuse the alliance of “losing sight of the ball” of economic growth, while encouraging a dole culture during its ten years in power.

The truth is, however, that most of the policies were more or less sound – it was their implementation that failed miserably.Moreover, as one hand gave, the other took away. Even as these policies granted rights to the poor on paper, rights to natural resources such as land, forest and minerals were being sold cheap and on the sly to corporations, for private benefit. Across states and political parties, in Chhattisgarh, in Orissa, in Jharkhand and in Madhya Pradesh, poor communities lost their homes and their rights. The endowment of natural resources became a curse rather than a blessing, a further cause for poverty instead of a cure.

What will the new NDA government do?

The NDA won on promises of economic growth and development. Many interpret this as a return to trickle-down economics, with “development” interpreted mainly in the context of corporate profits and related infrastructure such as Special Economic Zones, accompanied by displacement of the rural poor and ecological degradation. The BJP manifesto displays no understanding of the value of natural resources for the poor, while promising to “frame the environment laws in a manner that provides no scope for confusion and will lead to speedy clearance of proposals without delay”. Speeding up the clearance process for corporates has been the first thing that the new Minister for Environment has done, within his first week in the job.

This indicates that the UPA’s model of devaluing land, forests, water and minerals for the benefit of large corporations will continue under the new government, while dispossessing the poor and pushing them into further poverty and climate vulnerability.

Modi will be better advised to firmly embed the concepts of the GDP of the poor into his formula for economic growth and development, recognizing the true worth of natural resources for the poor. Instead of encouraging short-term profiteering and privatization of common property, he should put in place policies and incentives to encourage the participation of the poor as responsible managers of India’s natural resources. Meanwhile, the rights-based agenda initiated by the previous government should be strengthened rather than dismantled, particularly with regard to rights over common property resources and their decentralized governance, with a focus on improving implementation. This will to go much further in dealing with India’s poverty and improving the resilience of India’s poor than any separate measure in the name of climate change.

This entry was posted in Uncategorized. Bookmark the permalink.